I have had conversations with friends in various venues that goes like this.
Doesn’t the Bible degrade women? Isn’t Christianity a male dominated religion where women are insignificant? I am not surprised by these statements because I understand where our culture is. The truth is that Christ is the great liberator of those undervalued in society and women in particular. I'm giving away 10 free bookmarks of my artwork to the left to the first ten responders. Just send my your info to me through this website, or you tube, or my Twobytwo facegroup page, or instagram. To see my You tube video on-
John 4 memorization Recitation and Jesus' Value of women

Jesus’ value of women is demonstrated in the work of creation in which He was involved. The Scriptures state that both men and women were made in the image of God. “In the image of God He created them, male and female He created them” (Genesis 1:27). They also both were made to rule over creation as co-regents, “Be fruitful and multiply and fill the earth and subdue it, and have dominion over the fish of the sea and over the birds of the heavens and over every living thing that moves on the earth” (Genesis 1:28). Jesus took part in creation as Colossians 1:15 reveals, “For by Him all things were
created both in the heavens, and the earth, visible or invisible, whether thrones, dominions, rulers, and authorities. All things have been created by Him and for Him.”

Womankind’s equal design is demonstrated in her title. Adam gave a title for his wife using an equivalent title to his, asserting that she was an equal counterpart. The word for “woman” (ish-sha) is the feminine counterpart of “man” (ish). While Adam’s giving her a title displayed his authority, he crafted a title showing her equal value in a tender way. He spoke a beautiful poem showing his need and love for her (Genesis 2:23).

Women’s equality is evident in God’s design for their mission and ministry. Early in Genesis, the woman is given her name, “Eve” a name which revealed that she had a special role. Her name “Eve” (chavvah) is related to the word for “living” (chay) for what was the “mother of all the living.” She is designed to nurture life. Her mission and ministry expands from her home to the world. (In later sections I will write about how women’s mission and ministry can flesh out.) Both women and men are charged with the mission and ministry of serving the church and the world proclaiming the good news of the Gospel (Phil 4:2-3).

Women are given the amazing and unique task of being life bearers and nurturers. They alone possess the bodies to hold and develop life and sustain it. Their design is an amazing wonder and this is a great privilege and worthy of honor. She is given a unique role. This unique role is meant to be a beautiful dance where two partners seamlessly move in concert with one another. Her role as helper is in no way showing a difference of worth.

Her role is to follow her husband’s lead and submit herself. Likewise, his role is to sacrifice and die for his wife both in his desires and his body. Both roles are vital.  Both man and women are equal in worth. Men are instructed that their duty is to be like “Christ” who “gave himself up for her” (Eph. 5:25). The Trinity exhibits the balance of equal value with differing roles. Each member of the Trinity is equal in essence yet distinct in function.

Women’s equal value is also demonstrated in their design as God-worshippers. In Scripture, women are repeatedly used as great examples of faith. Jesus invites the woman at the well to become the type of worshipper that the Father seeks.
“Believe me woman, an hour is coming, and now is when the true worshippers will worship the father in spirit and truth, for such people the Father seeks to be His worshippers” (John 4:23).

The ability to bear children is a unique womanly gifting, but it is not central to a woman’s identity before God. Women’s faith in God is central to their identity.  In the Bible some women demonstrated themselves to be full of faith despite their inability to have children. As we will see later, this is in stark contrast to the opinions of many ancient cultures.

Women’s value is shown in her power to influence those around her. From the beginning, we see women having a powerful influence over the course of history. We will see both examples of highest spiritual influence and examples of extreme evil influence.

In the ancient cultures of the Old Testament world, the primary worth attributed to women was their ability to bear children. Hebrew women, on the other hand, had greater value than those in surrounding cultures. They could have various employments and important social standing. They were generally more respected and could be more assertive. But a high regard for women was not universal in Jewish thought. Around the time of the New Testament, some Rabbis regarded women as no more important than a slave or livestock. A famous prayer they coined was, “Thank you, God, that I am not a Gentile, a dog, or a woman.” Jewish culture came to show a deep distrust and dislike of women. They were not able to serve as witnesses in Jewish court and not able to divorce their husbands if they were unfaithful. However, men could divorce for any reason including a burnt meal. Women were not formally taught. They were not talked about much in Rabbinic teaching—almost as if they were so unimportant as to be non-existent. The Greek and Roman culture was not any better. Husbands might frequent temple prostitutes, and wives were expected to accept this adultery. Husbands regarded their own body as theirs, but their wives’ as their own, too.

In marriage both women and men had rights and were to please one another. The newly married man was to abstain from war or any other duty so as to “bring joy to his wife” (Duet. 21:10).

Women sometimes were lifted up in Scripture as more spiritually minded than their male counterparts. Hannah, Jochabed, Ruth, and Abigail were examples in the Old Testament of high spiritual influence. In Proverbs Wisdom is repeatedly personified as a woman. In the New Testament, Mary, Elizabeth, the widow of Zarepeth, and Priscilla are esteemed for their godliness.

Women are also demonstrated as using their powerful influence for evil. Eve used her influence by sharing the forbidden fruit with her husband who was with her. Time will not allow to tell the stories of Jezebel, and the fallout from Solomon’s foreign wives. Some of these were known for lying, scheming, and their paganizing influence. In the Proverbs there is also the personification of Evil as an adulteress.

Jesus’s ministry to women revealed his care and value of women. This was shown in how he treated his mother, the woman at the well, the woman bent over for eighteen years, the Syrophoenician woman, his interactions with Mary and Martha, and the ones entrusted as the first witnesses of His resurrection. Unlike the Rabbis of the day, Jesus used women as spiritual illustrations of truth in His teaching. He described the woman who loses her coin, the two women grinding at the stone mill, and many others. Jesus valued the unvalued in society, he treated women differently, and he was the great liberator of women.

Jesus ministered with women. Women were important financiers of Jesus’ ministry. They followed and served him. They also were the first to witness the risen Jesus. After the resurrection, women were key members of the one-hundred and twenty believers gathered together (Acts 1:14). The mother of John Mark, Mary, was the hostess of a church that met in her home in Jerusalem. The church in Philippi owed its beginning to Lydia’s conversion (Acts 12:11-16). While some have asserted that Paul and Peter were biased against women, the opposite is clearly true. Paul upilifted women as examples of godliness. Romans 16 mentions at least eight different Christian women as highly regarded by Paul. Priscilla was involved in private teaching and is often mentioned before her husband, indicating her importance (Acts 18:2, 18). Paul describes the church as a glorious woman, the very bride of Christ (Eph. 4:21-32). In the early church key ministry responsibilities were managed by godly women: caring for the sick (I Tim. 3:8-13, Rom. 4:2-3), prayer, fasting, instruction of women, and other activities.

The New Testament’s teaching on marriage and divorce, a dramatically different treatment than common in the culture of the day, protected the rights of women (I Cor. 7:1-11). Men and women were supposed to stay committed to each other. The rights of the wife details that the “husband’s body does not belong to Him alone, but also his wife.”

In conclusion, God’s valuing of women is radically affirmed in his design and taught in Scripture. Throughout the Scripture, this equality has been demonstrated through design, vivid illustrations of godliness, powerful influence, and unique purpose and roles. It is beautifully illustrated in Jesus’s superb interactions and treatment of women.
Posted by Unknown at 2:54 PM 1 comment:

Visit Two by Two on

Welcome to Two by Two Art Studio. I provide art decor& instruction for God's glory. Please enjoy browsing often as I plan to offer more inspirational pieces for your home and tutorials on how to create artwork yourself & with your kids. 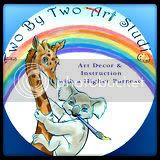 Use my colored logo above for color and shading reference and like me on facebook. Each coloring page needs to have age of child and be received before Nov. 1. Use any media you'd like.